Rafael Nadal has just won his 12th French Open and after this win at Roland Garros, its proved that Nadal is indeed the king of the clay court. Despite a tough beginning this year, where he lost in the Australian Open to Djokovic, Rafa has bounced back with his usual vigor to show the fans and opponents that he still can be counted on. In the first half of his game against Thiem, it seemed like he had met his clay court match, but halfway through, thanks to Thiem’s drop, he took the chance and stepped right back on top.

This wasn’t a one-off event where Nadal persevered to make a comeback. He’s been doing this throughout his career, defending almost unreachable shots from the baseline and covering humanly impossible ground at the same time. It’s no surprise then that when Andy Murray and other top tennis players were asked to name their toughest opponent, they say ‘Nadal’ without a moment’s hesitation!

What are the reasons for this? What makes him so successful and so incredibly hard to defeat? Let’s find out the lessons one can take away from his incredible career.

More than anything, Rafa says it has been his motivation, not an ‘obsession’ to do his best. Especially when he is compared to the titles held by world no.3 Roger Federer. He says “it is my goal to have those many titles, but not because someone else has it. I do not wake up and train every morning only for that!

As a distance learner, you need to challenge only one person every single day - and that person is you. Set your goals, work hard towards them and success will follow. 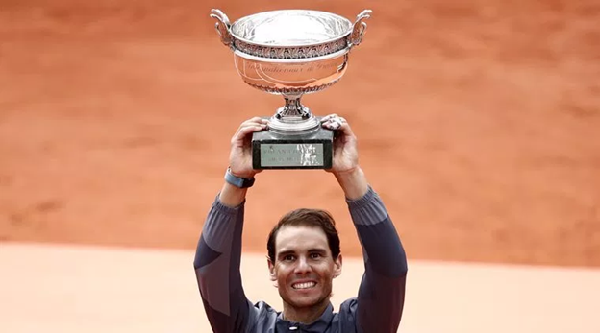 Despite losing to Novak Djokovic in January at the Australian Open and being unable to play due to a knee injury, Nadal never let go of his belief in his ability and his drive. He took the time out to work on himself, train harder to better himself. He did not allow the loss to hinder him or his attitude towards what he loves the most.

Accordingly, if you haven’t done well academically in the last set of exams, don’t lose your sense of motivation. Take a cue from Nadal and train harder and come back stronger.

Earlier this year, Nadal had a tough go at both Monte Carlo and Barcelona. Recovering from his injury, he found he was also not very motivated mentally and was not enjoying his game. After a game that he won in Barcelona, he locked himself in his hotel room, to introspect. He then decided that to play better, “I either had to take a break to physically recover or change my attitude. And ever since that day, my game has only gotten better.”

As a student of a correspondence course, it’s easy to lose your sense of motivation and focus as time goes on. However, introspection can certainly help you gain focus. Understand the importance of studying well and how it will impact your career.


After this win, Nadal has decided that he won’t be playing any grass court event until Wimbledon later this year. On being asked why he responded “I love to play on grass. And as everybody knows, I am not able to play so many weeks in a row as I did 10 years ago.” He wants a better chance at winning by staying healthy and avoiding injuries so he can come back stronger. This shows how he works around his aging body but keeps on top of his game with hard work and planning.

All in all, there are many ways you can take inspiration from this exceptional player to fuel your passion! Irrespective of whether you are one of his fans or not, it’s hard not to admire him for the qualities he possesses. Indeed, he epitomizes the fact that hard work and perseverance can lead you on to unbelievable heights of success! It’s time to pull up your socks and hit those aces in your distance education course! Good luck!